A transcript of this episode is available.

In this week’s episode, we finish “The Colossus of Ylourgne,” sections 5-8. Our site’s moved hosting, but we’re in the same spot on iTunes and our feed hasn’t changed. If you’re experiencing redownloaded episodes, that may occur because of the feed change.

Merriam-Webster defines an “oubliette” as a dungeon with a hole only at the top. Prisoners go in, they don’t come out. Unless it’s an ill-maintained oubliette. One example of an oubliette.

The phrase “Saracenic,” which was used several times to refer to Nathaire and to his surroundings, generally has an Arabic and Muslim connotation. The meaning, however, varies widely and could refer to Muslims at the time of the crusades, to Muslim art and architecture in Spain, to Muslim art and architecture in India, etc. In art and architecture (and furniture), it often contained intricate geometric designs that didn’t generally represent persons or even animals (as forbidden by strict Islamic practice). We couldn’t find an image of a Saracenic cushion, but one might imagine ornate and colorful designs.

Edited to add: Thanks to the reader who set us this pic of a saracenic cushion! 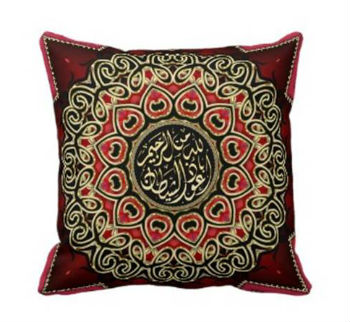 The story of two human-formed colossi, mentioned by Phil, is “In the Hills, the Cities” from Clive Barker’s Books of Blood. The Hellboy story which was inspired by Colossus, called “Almost Colossus,” can be found in Hellboy collection #3: The Chained Coffin and Others. Lots of good stories in both those collections.

Next week, we’ll be talking about “The Mandrakes.”