Episode #9: “The Holiness of Azédarac”

This week’s episode is on Clark Ashton Smith’s “The Holiness of Azédarac” (originally titled “The Satanic Prelate”). “Holiness” was published in Weird Tales in November of 1933. 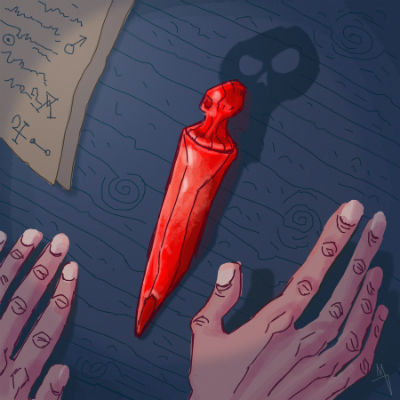 You can hear H.P. Lovecraft & Clark Ashton Smith discussing the history of Averoigne as used in this story in our two interludes: Lovecraft’s letter to CAS and Smith’s letter to HPL.

If you missed the allusions in the text, Iog-Sotôt is Yog-Sothoth of HPL fame and Sodagui is Tsathoggua of CAS’s pantheon/pandemonium. Both are undoubtedly CAS’s attempts to mimic the evolution of pronunciations through the centuries. Lilit is Lilith, first wife of Adam who is thought to be perhaps a demon or a monster.

Our next episode will be “The Disinterment of Venus.”

Special thanks to the Hay Library for being so friendly on our visit and to Mike Mucci for the Azédarac drawing!