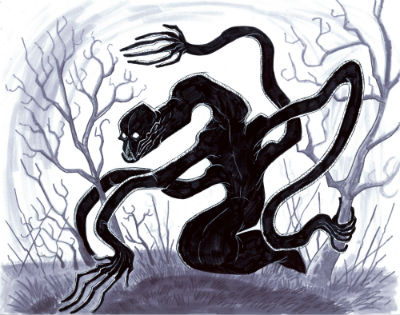 A transcript of this episode is now available.

This week’s episode is on “The Mandrakes.” At the beginning of the episode, we noted a change in our line-up and an error we’d made regarding story order. The proper story order is reflected on our About page, although we kept Colossus where it had been and noted where it should have been.

The movie Phil referenced about a woman whose feelings flow into her cooking was Like Water for Chocolate (1992). The Japanese horror film was Cure (1997).

Information about Gilles de Rais can be found here. De Rais was also hanged, but the article does not mention whether or not his corpse was then burned.

The Winners of our Giveaway

Many congrats to the winners of our giveaway, whose “lost or unwritten Averoigne story” ideas were read on the podcast today:

In the decaying ruins of an unnamed abbey, a young woman finds a manuscript purporting to be a true and accurate account of the habits and deeds of the wild loup-garou. She returns to her village and becomes obsessed with proving the validity of the document (and the veracity of the existence of the feral beasts) to the disbelieving townsfolk, going so far as to maul an old woman in a manner consistent with the manuscript to provide “evidence.” She is caught and cast out of the village, wandering in madness through the primeval forest until, joyously vindicated at last, she meets her death on the claws and teeth of a loup-garou.

In modern day Averoigne two friends embark on a road trip to sight see the horror haunted historical sights of the Averoignian countryside. Their adventure turns perilous when they realize that their journey is closely tailed by a stalking, flesh-hungry werebeast and they have to keep moving to survive.

A highwayman is hiding out in the woods of Averoigne at night when he comes upon a young woman; she tells him a disturbing story about a village whose inhabitants were picked off one by one by a loup-garou. At the end of the story the girl reveals that she herself was the loup-garou, and devours him.

The body of a sorcerer washes up on the shore of the Isoile River; whispers of his death begin surfacing around Averoigne and of the binding spell that died with him. Now free from the sorceries that imprisoned their shapeshifting abilities, an ancient family attempt to reclaim their wolfen birthright.

Thanks to all the listeners who submitted and promoted the contest!

Next time, we’ll be doing the published version of “The Beast of Averoigne.” For extra credit, though, read the original version of the story to understand the style he first intended and get a little more background than we’re given in the final version.

A transcript of this episode is available.

In this week’s episode, we finish “The Colossus of Ylourgne,” sections 5-8. Our site’s moved hosting, but we’re in the same spot on iTunes and our feed hasn’t changed. If you’re experiencing redownloaded episodes, that may occur because of the feed change.

Merriam-Webster defines an “oubliette” as a dungeon with a hole only at the top. Prisoners go in, they don’t come out. Unless it’s an ill-maintained oubliette. One example of an oubliette.

The phrase “Saracenic,” which was used several times to refer to Nathaire and to his surroundings, generally has an Arabic and Muslim connotation. The meaning, however, varies widely and could refer to Muslims at the time of the crusades, to Muslim art and architecture in Spain, to Muslim art and architecture in India, etc. In art and architecture (and furniture), it often contained intricate geometric designs that didn’t generally represent persons or even animals (as forbidden by strict Islamic practice). We couldn’t find an image of a Saracenic cushion, but one might imagine ornate and colorful designs.

Edited to add: Thanks to the reader who set us this pic of a saracenic cushion!

The story of two human-formed colossi, mentioned by Phil, is “In the Hills, the Cities” from Clive Barker’s Books of Blood. The Hellboy story which was inspired by Colossus, called “Almost Colossus,” can be found in Hellboy collection #3: The Chained Coffin and Others. Lots of good stories in both those collections.

Next week, we’ll be talking about “The Mandrakes.”

This week’s episode covers the first half of “The Colossus of Ylourgne,” sections 1-4. You can subscribe in iTunes or via RSS.

The illustration above was commissioned by Farnsworth Wright to go along with the story’s publication. According to his correspondence, Smith was dissatisfied with the piece as a whole, but liked the two torturing demons.

For our casting of Gaspard, do you prefer Joseph Gordon-Levitt, Ryan Gosling, or someone else? Let us know in the comments, otherwise Ruth and Tim will never settle this.

You still have the rest of today (6/13/12) to enter our weird fiction book giveaway. We’ll be posting and contacting winners sometime on Thursday or Friday.

Our next episode will be the second half (sections 5-8) of “The Colossus of Ylourgne.”

Episode #4: “The Maker of Gargoyles”

Thanks to Night Shade Books, we’re very excited to announce our show’s first giveaway! We’re giving away copies of The Miscellaneous Writings of Clark Ashton Smith, Book of Cthulhu (short stories) edited by Ross Lockhart, Best Horror of the Year v.4 edited by Ellen Datlow (pub. 2012), and Laird Barron’s The Croning. To enter, submit your 1-2 sentence synposis for an unwritten Averoigne story. You can submit the entry to our Twitter, our Facebook, our Google + page, or as a comment on this post (note, private Twitter accounts should choose an alternative method, unless we follow you back). If using Twitter, please limit your synopsis to 2 tweet maximum.

Winners will be determined in 2 ways. First, as a group, we’ll pick our favorite synopsis. That person will win a copy of Miscellaneous Writings and one other book of their choice. The other three books will be given away randomly to participants. So even if you’re not sure your idea is the absolute best, give it a shot! If you’re looking for more inspiration, check out the Averoigne story links in our intro post and read ahead a bit.

This week’s show is about “The Maker of Gargoyles,” the third story in the Averoigne cycle. It was first published in August of 1932, by Weird Tales. You can download the episode here, or subscribe in iTunes, by RSS, or on Stitcher. This week, we’ve had to issue our first of a (thankfully) few warnings for sexually violent stories. Each podcast containing sexual violence will begin (or begin after something like the contest announcement) with a warning that contains further info on the situation.

Since it’s come up enough, the difference between aspergillus, which Smith keeps saying, and an actual aspergillum. Fun fact, Ruth was sprinkled by an aspergillum just a couple days ago and did not burst into flame, disappear, etc. She is probably not a lamia. Probably. Ruth tries to avoid aspergillus, because that’s disgusting.

Stories mentioned in the podcast were Guy Davis’s “The Marquis” and China Mielville’s Perdido Street Station.

Thanks to Kevin MacLeod for the music in this week’s episode. Also, apologies for Ruth’s mic. It switched from her good one to the basic internal one without anyone noticing until after the podcast was recorded.

Our next episode will be the first half (sections 1-4) of “The Colossus of Ylourgne.”

Episode #3: “A Rendezvous in Averoigne”

This week covers “A Rendezvous in Averoigne,” the second story in Clark Ashton Smith’s Averoigne Cycle. Rendezvous was first published in the April/May 1931 issue of Weird Tales, alongside Robert E. Howard’s “The Children of the Night” and H.P. Lovecraft’s poem “Alienation” (#32 from Fungi from Yuggoth).

The Ray Bradbury quote was from the intro to Arkham House’s 1988 collection A Rendezvous in Averoigne: The Best Fantastic Tales of Clark Ashton Smith. The title is a trifle misleading, as this contains stories from throughout Smith’s career, not just his Averoigne works (nor all of them).

The film The Fearless Vampire Killers was released in 1967 and was written by and co-stars a young Roman Polanski.

And shout out to the Podcast to the Curious, about the works of M.R. James. We’re fans of more than their accents.

Join us again on May 30th as we read “The Maker of Gargoyles.”